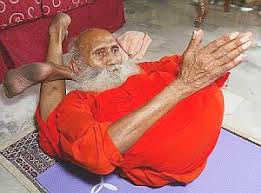 Swami Yogananda was our 107 years old teacher and dear friend who taught us the deep knowledge of Sukshma Vyayama – the so called Yoga of the Subtle Body – and the passion of sharing this knowledge with the world (in samadhi since 2015). Shuksma Vayayama is an ancient Yoga practice that includes a lot of pranayama (breathing techniques), pressure (ex. massage) and simple movements in order to purify and open the energy channels of the subtle body. Through it we get energized and are able to connect with our deep nature and soul. Sukshma Vyayama is a very easy to do practice that is beneficial for all ages and can be practiced by everybody (children, old or ill people).

Swami Yogananda dedicated his life to yoga and to the welfare of all people with no single thought of financial prosperity unlike the most of the contemporary gurus. He has never understood the idea of being commercial and dishonest with the people. He remains always loving, pure and free in his teachings and attitude.

Swami Yogananda was one of the last teacher after Swami Dev Murti ji who enjoyed the life at such age without sickness or weakness of the body thanks to his daily yoga practice, Pranayama and yogic diet. His life was a real proof that there are actually no age limits for the human being living on Earth. Dear Swami, we bow down in front of your soul and spirit!

Sanjay yogi is an experienced 200 & 500 Registered Yoga Teacher by Yoga Alliance. He is facilitating yoga classes, yoga workshops, yoga retreats and yoga teacher training courses in different countries (India and Europe) since 2004. His education covered fields like Classical Yoga, Pranayama, Ayurveda Science, Naturopathy, Pulse and Aura Diagnostics, Yoga therapy, Pranic healing, Vedic rituals. He visited many traditional ashrams and Buddhist monasteries in Nepal, Bhutan and the Himalayas where he learned other aspects of Yoga and increased his knowledge of Buddhism, Yoga therapy and Pranic healing.

Among his teachers are Swami Yogananda, Swami Veda Bharti, Satyananda, Swami Dev Murti, Iyengar, Pattabhi Jois, as well as many unknown saints and sages with great knowledge from the Himalayas. He practiced Yoga and Meditation since he was 10 years old. His first teacher was his grand father who was a friend of Dhirendra Brahmachari. According to him the truth is present in the heart of everybody and it cannot be found in any ashram or monastery. The real peace is in the heart – not outside. We all are equal in the eyes of God and everybody can live a happy and complete life in the every day’s reality. There is no reason to search the happiness or the guru by escaping in a spiritual country or into an ashram.

Dr. Manoj Kumar has studied in Master degree in Hum. Cons. & Yogic Science and then completed his Ph.D in Yogic Science. He applies the principles of Raja Yoga in his daily life and is an inspiring lecturer with a rich spiritual experience. He is Swami Yogananda‘s personal interpreter and assistant on his worldwide tours. He is giving Yoga Philosophy lectures in different universities in India, and is leading Yoga Philosophy, Pranayama and Meditation at Yoga Teacher Training courses in countries around the globe. He also teaching Kundalini yoga to advance Yoga practitioner. He giving yoga workshop all over world. any one can join him with group or individual for 7 – 10 days. some yoga seekers just interested join him to improve your inner knowledge.

APPLY FOR the 200-hrs YTT course in Sofia, Bulgaria